What is light pollution and how does it affect me? - Axon Optics Skip to content 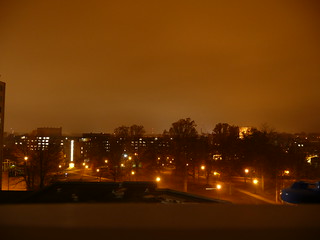 Most city sky’s have become virtually empty of stars. Light pollution is mostly bad lighting design which shines artificial lights in streets, buildings, parking lots, etc into the sky, where it’s not wanted, instead of focusing it downward.  This lighting washes out the darkness of the night and the stars of the sky and it can alter the light rythms which many forms of life, including people, have adapted.

Every once in awhile we like to post a link to academic research. This is a great article about light pollution from the Journal of Environmental Management.  It may be interesting to those of you who suffer from insomnia.

Limiting the impact of light pollution on human health, environment and stellar visibility

Light pollution is one of the most rapidly increasing types of environmental degradation. Its levels have been growing exponentially over the natural nocturnal lighting levels provided by starlight and moonlight. To limit this pollution several effective practices have been defined: the use of shielding on lighting fixture to prevent direct upward light, particularly at low angles above the horizon; no over lighting, i.e. avoid using higher lighting levels than strictly needed for the task, constraining illumination to the area where it is needed and the time it will be used. Nevertheless, even after the best control of the light distribution is reached and when the proper quantity of light is used, some upward light emission remains, due to reflections from the lit surfaces and atmospheric scatter. The environmental impact of this “residual light pollution”, cannot be neglected and should be limited too. Here we propose a new way to limit the effects of this residual light pollution on wildlife, human health and stellar visibility.

We performed analysis of the spectra of common types of lamps for external use, including the new LEDs. We evaluated their emissions relative to the spectral response functions of human eye photoreceptors, in the photopic, scotopic and the ‘meltopic’ melatonin suppressing bands. We found that the amount of pollution is strongly dependent on the spectral characteristics of the lamps, with the more environmentally friendly lamps being low pressure sodium, followed by high pressure sodium. Most polluting are the lamps with a strong blue emission, like Metal Halide and white LEDs. Migration from the now widely used sodium lamps to white lamps (MH and LEDs) would produce an increase of pollution in the scotopic and melatonin suppression bands of more than five times the present levels, supposing the same photopic installed flux. This increase will exacerbate known and possible unknown effects of light pollution on human health, environment and on visual perception of the Universe by humans. We present quantitative criteria to evaluate the lamps based on their spectral emissions and we suggest regulatory limits for future lighting.